An Open Letter to the Energy Community and EU Commission

(Bread and Roses by J. Oppenheim)

Although poor in many ways throughout its history, Bosnia and Herzegovina has been endowed with enormous wealth in one respect. It abounds in freshwater. This small country of roughly three million people and the area just above 51 thousand square kilometres is ranked sixth in Europe for its freshwater resources. Most of the water springs forth from the heart of the Dinaric Alpes mountain range and, rushing down towards valleys and plains, carves marvellous canyons through the rocky terrain along the way. These precious rivers and streams have been both bread and roses to the people of BiH. They have made it possible for the communities on their banks to survive and develop, while also nourishing people with incredible beauty.

This treasure is now being ruthlessly looted and irreparably damaged. The rivers of Bosnia and Herzegovina are under threat.  Private investors, coming from BiH mostly but also the European Union, have already built or are building hundreds of small hydropower plants all over the country. Ancient forests are being torn down and butchered. Canyons sculpted over thousands of years are being ravaged. Riverbeds once rich in life have dried out, and already impoverished communities deprived of their main source of life and beauty.

The workings of the Energy Community and selective approach to European Union directives have unfortunately contributed to setting the scene for the devastation of wild rivers. This is the case because the renewable energy requirements have not been embedded into the broader EU nature protection framework. The requirements for strict nature protection should have been integral to the energy transition requirements to prevent any misuse - the misuse which and should have been foreseen. It should also be noted that the 2018 EU Strategy for the Western Balkans failed to make any stronger reference to environmental protection.

As it stands now, Bosnia and Herzegovina is bound by the contract with the Energy Community to ensure that 40 per cent of its energy comes from renewable sources by 2020. By comparison, the target set for Slovenia, a prosperous EU member state, is 25 per cent within the same time frame. The renewable energy target, however rightful the cause may have been, has therefore served as a pretext for the authorities in BiH, notorious as they are in their disregard for the environment, to promote private investment in small hydropower plants. The business is lucrative and risk-free: the label of renewable energy source allows the state to subsidize these projects by guaranteeing to buy off the total amount of energy thus produced over a period of 12 to 15 years at a price most favourable to the investors. This is funded from renewable energy tax paid by all registered consumers of energy in the country.

Small hydropower plants, however, are not a source of sustainable renewable energy but of irreparable damage to the rivers, local communities, wildlife and biodiversity. They are particularly so in our situation: BiH legal framework is missing some of the key instruments and mechanisms of nature protection. The country has never incorporated EU Water Framework, Birds and Habitats directives into its laws and regulations. It also has the lowest percentage of protected areas (2.28%) in Europe, and it is among the worst in the world in that regard. Environmental protection institutions are deliberately understaffed and underfunded. BiH is regularly ranked last in Europe in terms of environmental performance and has an appalling record in the ecosystem vitality. Such a chaotic state of environmental protection in the country has resulted in large-scale, even systemic devastation of nature without any sanctions.

In the case of small hydropower plants, the deficient legal framework, and the incapacitated and inert apparatus of institutional control have combined with the strong links between certain business clans and party elites. This has resulted in mass construction of small hydropower plants without any regard for environmental and social impact. As a rule, construction permits are issued on the basis of flawed environmental studies. The public interest of the local communities and BiH society in general, is actively ignored. People are denied access to information as well as participation in decision-making processes. Once operational, the hydropower plants are not being supervised by the authorities, so even the meagre environmental regulations on ecological flow are not observed. The hydropower plants thus regularly dry out hundreds of kilometres of riverbeds and kill all wildlife while restricting access to water for local communities.

The situation will be further aggravated by the new set of guidelines which have been drafted with the support of several international agencies, led by the German Agency for International Cooperation (GIZ). National institutions are now preparing to incorporate the guidelines into the legal framework. Once that happens, even the rivers within our few national parks will not be safe from the hydropower plant construction. 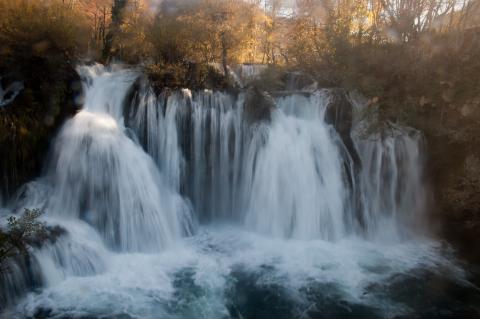 People are rising up all over the country to save their rivers. Villages are holding guard, standing in front of bulldozers armed only with their courage; people across the country are collecting money for legal contestations; activists are campaigning for an immediate and permanent ban on the hydropower plants. The country which is usually cited as an example of internal strife and tensions is now united. It is united in resistance to the devastation of our only treasure that has so far remained mostly untouched by brutal privatization of the common goods over the last three decades.

Some progress has been achieved - the House of Representatives of the Parliament of Federation of Bosnia and Herzegovina has just (23 June 2020) passed a decision on the full ban of the small hydropower plants. But this is just a beginning, and we still have a long way to go: the plants are mushrooming across Republika Srpska too, whereas the Federation parliamentary decision can be easily subverted in practice.

We, therefore, remain the only defence of our rivers and their life-world, and for this, many of us are being regularly exposed to violence and threats by both investors and government institutions. We do not seek protection, funds, or moral support. Still, we are bound by our commitment to the protection of nature to bring this devastation of shared European environment to the attention of both the European Union and the Energy Community.

We see it as our duty to warn the people and states of Europe: The irreparable damage to the natural heritage common to the entire continent is being done, at least in part, due to the partial implementation of the EU green policies and failure to acknowledge numerous problems related to Strategic Environmental Assessments, Environment Impact Assessments and public consultation process in relation to hydropower projects. The policies should not be designed without understanding the local specifics and respecting the principle of environmental and climate justice as the only globally acceptable response to the climate crisis. However justified and needed the current policies may be, their selective implementation is telling us that we remain unimportant peripheral parts of Europe and therefore our environment matters for exploitation only.

The devastation can be stopped if you take responsibility and revise your policies in light of the specific national circumstances:

Taking these steps would also be of significance for the entire region, especially Serbia and Albania, where our fellow river guardians are courageously fighting for their rivers day after day.

We, guardians of the rivers, have taken our share of responsibility.
It is high time you take yours.